The second meeting of the G20 Employment Working Group was held in Hamburg from 15 to 17 February 2017. In various sessions, delegates developed and discussed measures and potential goals on the topics of "sustainable global supply chains" and "the future of work".

In his keynote address John Ruggie, Professor in Human Rights and International Affairs at Harvard's Kennedy School of Government and former Special Representative of the United Nations Secretary General for Business and Human Rights, urged the G20 to fulfil their responsibilities and take joint action so that all people benefit equally from globalisation and interlinked economies.

A delegation from Myanmar consisting of high-level representatives from the government and the social partners from labour and management also attended the meeting as guests. The delegation reported on progress in the implementation of the "Vision Zero Fund". This prevention fund was established in 2015 during Germany's G7 presidency to advance occupational safety and health in low-income producing countries. Myanmar is a pilot country for the Fund. Representatives of "ACT" (Action, Collaboration, Transformation) presented their initiative to address the issue of living wages in the textile and garment sector along global supply chains. ACT is an alliance of brands, retailers, manufacturers and trade unions of the international textile and garment industry.

In the session on the “future of work”, delegates presented various national strategies for dealing with current trends, such as globalisation, digitisation, demographic change and the changing societal values. Visits to the Hamburger Hafen und Logistik AG, a port and transport logistics company, and Airbus Operations GmbH rounded off the program of the working group: There, the G20 delegates were shown examples of operational processes transformed by automation and new technologies and the role of "social partnership" in companies when addressing the "the future of work".

At the next meeting in Geneva on 27 and 28 March 2017, the focus will be on the content of the final declaration of the labour and employment ministers. 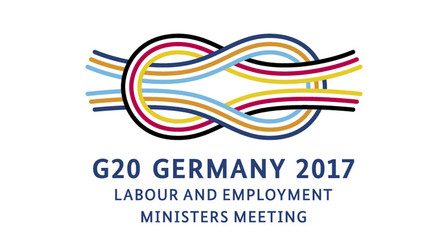 Germany assumed the Presidency of the G20 on 1 December 2016.