Within the German Government, the Federal Ministry of Labour and Social Affairs is the ministry in charge of fighting human trafficking for labour exploitation and of helping victims.

Obligations under the coalition agreement

In its coalition agreement concluded in December 2013, the German government committed itself to focusing more strongly on the fight against human trafficking for labour exploitation. As a first step, a working group comprised of representatives of the Federal Government and the Länder and tasked with fighting human trafficking for labour exploitation was installed. It is chaired by our ministry. The working group brings together representatives of the competent Federal Government and Länder ministries, among them those responsible for Labour and Social Affairs, the Federal Criminal Police, trade unions and employers, specialised counselling centres working with victims of human trafficking and other actors such as social security funds and the customs unit responsible for combating illicit work. On top of that, we are also involving numerous representatives of other countries and international organisations such as the ILO, the Council of Europe, the European Commission and the Organization for Security and Co-operation in Europe (OSCE) in the activities of this working group. Also on board are the German Institute for Human Rights, the Alliance against Human Trafficking for Labour Exploitation, the welfare organisations of the Catholic and Protestant church (Caritas and Diakonie) and members of the academic community. This broad coalition means that an important step has already been taken: There is a network of all relevant stakeholders and a dialogue among them aimed at fighting human trafficking.

Results of the working group

At its first meeting in February 2015, the working group pin-pointed the key areas in which urgent action needs to be taken. They include enhanced prevention and awareness-raising campaigns in the competent public authorities so they can better identify and protect victims. Other priorities are prosecution, improvements in the areas of residence, victim protection and witness rights as well as better overall access to the justice system. Especially the last point constitutes a significant barrier for people from abroad who do not speak German, and who may be exposed to physical and emotional abuse. To be able to provide the victims with effective assistance, it is also necessary to establish and scale-up specialised counselling centres and to improve initial counselling. In all of this, it is of utmost importance to involve the social partners, i.e. employer and trade union organisations.

What is the way forward?

Until mid-2016, three working-level meetings will be held with the aim of drawing up a strategy for the fight against human trafficking by the end of 2016. The meetings focus on the areas listed above.

Human trafficking often happens across borders, which is one of the reasons why it is so difficult to fight. This is why it is all the more important to work together internationally and to coordinate the national strategies at the European level. There are plans to do more on both fronts. Close cooperation within the OSCE (Organization for Security and Co-operation in Europe) and the Council of Baltic Sea States already exists.

Along with other legally-binding documents such as the Palermo Protocol, the 2015 Council of European Convention on Action Against Trafficking in Human Beings and EU Directive 2011/36 on preventing and combating trafficking in human beings and protecting its victims serve as the international framework for Germany. Germany has a legal obligation to transpose this directive into national law, which is why the German parliament is deliberating on a bill in this field. Moreover, the ILO has modernised its Convention 29 on forced labour, which dates back to 1930. The new protocol attached to the Convention is binding under international law and now also deals with practices of human trafficking. Its goal is to step up international efforts aimed at the abolition of forced labour. Germany is in the process of ratifying this protocol. 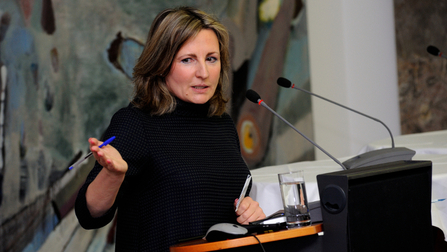 The Federal Ministry of Labour and Social Affairs is the lead Ministry for the issue of trafficking in human beings for labour exploitation. The most relevant measures and experiences are being discussed by a Federal Working Group set up by Labour Minister Andrea Nahles. 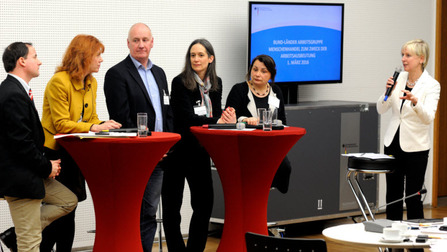 First work­shop of the work­ing group of the Fed­er­al Gov­ern­ment and the Län­der on fight­ing hu­man traf­fick­ing for labour ex­ploita­tion: coun­selling and sup­port struc­tures

What should support and counselling structures for the victims look like? This question was discussed at a workshop of the Federal Government/Länder working group on fighting human trafficking for labour exploitation.