Recognition of your qualifications

You have a better chance of finding a good job if you have an occupational qualification, a school-leaving certificate or a university degree. Find out here how your qualifications are assessed and recognised in Germany

If you have completed vocational training or a course of study, you must have your qualification recognised in Germany. To simplify this procedure, the Federal Government has adopted the so-called Federal Recognition Act (Act to Improve the Assessment and Recognition of Foreign Occupational Qualifications).

The act provides for the most standardised and transparent procedures possible for all occupations regulated under federal law to ascertain the equivalence of the foreign occupational qualification with its German counterpart. This is a requirement to be able to work in many occupations or to take up self-employment. This applies especially for all regulated occupations, such as approved crafts, physicians, nurses or pharmacists.

Where can I get advice?

First of all at your employment agency (as asylum applicant or tolerated person) or your job centre (as a recognised refugee), where you will be given advice on your qualifications and the German labour market. For specific questions, your counsellor will refer you to the IQ contact points, which provide initial advice to applicants for recognition at regional level in all Länder (federal states). The Federal Government promotes this counselling service under the funding programme, Integration through Qualification (IQ), which is jointly sponsored by the Federal Ministry of Education and Research, the Federal Ministry of Labour and Social Affairs and the Federal Employment Agency.

Where do I get my qualifications recognised?

It is possible to have school, academic and vocational qualifications recognised. The procedure begins with an application for an assessment of the equivalence of a foreign occupational qualification. This is submitted to a recognition agency responsible for the respective occupation. Depending on the Land (federal state) and occupation, different agencies are in charge of verifying equivalence.

The online portal, Recognition in Germany, shows you the way to the recognition agency, provides all the relevant information you need on recognition procedures in German, English, Greek, Italian, Polish, Romanian, Spanish and Turkish. You can find the competent authority for your occupation with the Recognition Finder.

After submission of all requisite documents, the procedure should not usually take longer than three months. The applicants must bear the related costs themselves, which depend on the fee regulations of the recognition agency and the individual work involved. They must be paid in advance as a rule.

Under certain circumstances, employment agencies and job centres can bear the procedural costs for their customers. Costs for possible necessary upgrading qualifications can also be borne. Assistance must be agreed on in each individual case with the employment agency or job centre staff.

On the one hand, the Federal Recognition Act comprises the federal Occupational Qualification Assessment Act under the purview of the Federal Ministry of Education and Research and on the other regulations on the recognition of occupational qualifications in about 60 legislative acts and regulations for regulated occupations under federal law, such as for health workers (Federal Medical Practitioners’ Act, Health Care Act) and master craftsmen (Crafts Code). The Länder have also enacted legislation for occupations under their purview (for example, teachers, engineers, architects, social welfare occupations) All Länder recognition legislation has entered force as of 1 July 2014. To be able to provide the most streamlined procedures for skilled personnel with foreign qualifications in Germany, the aim is still to instigate recognition procedures for all occupations, including for third-state qualifications - especially for shortage occupations, such as teachers and engineers.

The Recognition Finder will navigate you quickly to the appropriate authority responsible for your case. 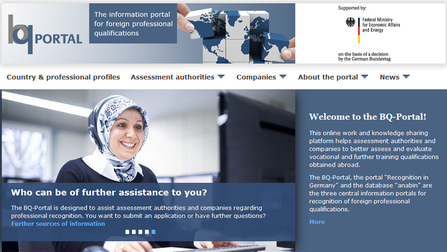